Given the importance of the Advent season let’s take a look back  to what we’ve said before about the meaning and history of this important part of the liturgical year.

Advent (means to arrive) is a season of four weeks, and it marks the beginning of the Church’s liturgical year.

Instead of looking back at the first coming of Christ, the first three weeks of the Advent Season look forward to the second coming of Christ and the fulfillment of the Kingdom of God (the Eschaton), which will bring all things to their completion.

The last week is “Incarnational” (literally, the enfleshment of God).  In this last week we look back to the first coming of Christ, when the Son of God took on human form, when the promises of God were fulfilled and the Son of God comes to dwell with the people of God.

The Season of Advent invites us to pause and mark the many ways that God is with us (Emmanuel) in our lives, that we may give thanks for the light in the dark and devote ourselves to preparing the kingdom.  Consider taking time for quiet prayer and contemplation, take advantage of the various communal prayer opportunities such as Sunday Evening Prayer, Communal Penance Service, etc.,  as part of your own preparation and recognition of God’s presence among us.

The History of Advent

The two-fold nature of Advent (both looking forward and looking back) reflect the two-fold history of its development.  The Season of Advent is first encountered in the 4th century in Gaul (today France) and Spain.  It emphasized the coming of the Kingdom (looking forward) and with that it tended to be penitential in nature.  From it we get the use of the color purple.  At about the same time Rome also was celebrating an Advent Season but their celebration was more a commemoration of the birth of Christ (looking back).   It is from this practice that Advent comes to mark the beginning of the Liturgical Year and it is from this Roman practice that we receive the “O” Antiphons – the poetic texts that speak about Christ (think “O Come O Come Emmanuel – a hymn that uses the O Antiphons). 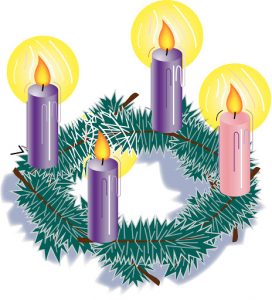 Wreaths are used by Christians fairly early in the medieval period and specifically Advent wreaths first appear in the 16th century and become common in Catholic homes over the next two hundred years.  They represent the two-fold understanding of Advent mentioned above.  The circle of the wreath represents eternal life as does the use of evergreens.  There are four candles: three purple and one pink or rose.  The three purple candles reflect the penitential and preparatory nature of the season (also mentioned above).  On the first two Sundays of Advent we light two of the purple candles.  On the third Sunday of Advent we light the rose candle.  This third Sunday of Advent is called Gaudete or Rejoice Sunday and the lighter color represents a lightening of the mood, a focus on the joy to come.  The final purple candle is lit on the final week of the Season.

Praying with an Advent Wreath

Traditionally, families gather to light the Advent wreath before dinner and after the food has been blessed. There are many prayer texts available, often using the O Antiphons as part of the prayer and all reflecting the two-fold nature of the Advent Season.

Visit LoyalaPress for the Prayer for Blessing an Advent Wreath